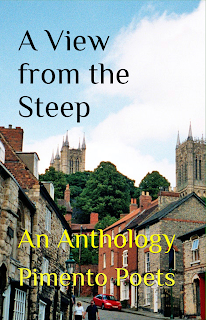 Posted by Gorseinonboy at 11:06 AM No comments:

Pimento Poets: SHRIEK Vernon Goddard: Shriek. It’s the middle of August, Dry year behind. Think. Reach ahead for words with legs, Something to move this along....
Posted by Gorseinonboy at 2:42 AM No comments:

COBOURG -The Cobourg Poetry Workshop's Third Thursday Readings resume on June 16 with another poetic coup -the 2010 Griffin Poetry Prize winner, Karen Solie, headlining an anticipated evening of fine poetry at Meet At 66 King East.
Solie has completed what could be called the Triple Crown of Canadian poetry, also winning the 2010 Trillium Book Award for Poetry as well as the 2010 Pat Lowther Memorial Award, all for her latest book, Pigeon. The Griffin is the world's largest prize for a single collection of poetry in English, with one award of $65,000 for a Canadian book of poetry and a similar award for an international poet.
Solie came to prominence in 2002 as a finalist for that year's Griffin Prize for her collection, Short Haul Engine, which went on to win the 2002 Dorothy Livesay Poetry Prize. Livesay, one of Canada's premier early poets, first published in 1928, went on to win two Governor General's Awards for Poetry in 1944 and 1947. The award in her name was established in 1986.
Joining Solie at the Thursday reading will be Cobourg writer Linda Hutsell-Manning, recently celebrating publication of her latest novel, and David Sheffield, who will be making his reading debut.
Doors open at 7 p.m. with the readings commencing half an hour later. Admission is free. Go to www.poetrycobourg.cafor further details.

Posted by Gorseinonboy at 7:02 AM No comments:

What Price World Book Night? | The Spectator
Posted by Gorseinonboy at 10:30 AM No comments: Image by lisby1 via Flickr
The new Dr Who started on TV yesterday........

Posted by Gorseinonboy at 5:11 AM No comments:

Chain will base movies on books by authors including Jackie Collins, Philip Pullman and Dick Francis

There is an unlikely new player in the British film industry with ambitions to change the world of entertainment. Tesco, the supermarket giant, has moved into movie mogul territory this weekend with the launch of a multi-million-pound production arm poised to make films of books by a slew of bestselling authors.

The first release from the Tesco studio will be Paris Connections, a tweaked Jackie Collins tale being shot on location in Paris early next month. Set in the glamorous world of fashion shows and rival couturiers, it tells of investigative journalist Madison Castelli's efforts to uncover the truth behind a series of murders of Size Zero models.

Directed by Harley Cokliss and starring Anthony Delon, it will go straight to DVD after a number of cinema preview screenings. The film will then be sold exclusively in Tesco stores and has been specially adapted by Collins for the chain from her 1999 bestselling murder mystery LA Connections.

"Jackie has rewritten the book for us, which is fantastic, because we thought Paris would be the most glamorous location to film in. But all the other stories we are adapting are closely based on existing books," said Ileen Maisel, of Amber Entertainment, the production company making the films in collaboration with Tesco. Next in line for production are titles by Dick Francis, Jacqueline Wilson, Philip Pullman and Judy Blume.

"We are able to involve the writers at every stage, even with the casting decisions. And Tesco sells an enormous amount of books, of course; so for an author to have his DVDs on the shelf alongside his books and to sell them simultaneously sounds like a very good thing," said Maisel.

The American-born producer, formerly a top executive at New Line Cinema, has produced a number of big-budget films, including the screen adaptation of Pullman's novel Northern Lights. She is now in Paris with her colleague Lawrence Elman, choosing locations that already include the Paris Opera and a pleasure cruiser on the Seine.

"Ileen has been working with high-profile authors for a long time," said Elman, a former television producer. "Normally when an author works with a film-maker, they just sign on the dotted line and then shake hands, before they are told, 'Thank you very much. See you at the premiere.' Instead, we have offered them a partnership and it is very enticing for them."

For Tesco, the appeal of the deal was the roster of big-name writers that Amber could deliver. "We liked Amber's idea because it brings us authors who are ideal for this," said Rob Salter, Tesco's entertainment director. "It had to be a project that needed no explanation. When you say 'Jackie Collins', it doesn't need any explanation. The fact they had a number of people they could sign up who are among the best-known authors out there was obviously a big thing."

Tesco describe the multi-million-pound deal with Amber as one that "makes the most of what each company does best", with the film company in charge of production and Tesco running the marketing.

The shift into film production is part of Tesco's effort to make the most of its growing influence as a retailer of mainstream books and home entertainment.

Salter explains that the deal with Amber is part of a project to make Tesco's entertainment brand more potent: "A deal such as this means we can work on projects much earlier and have involvement while the film is being made. An exclusive title is a great driver to bring people to our stores anyway, but if we are involved in the film from the start we can involve our customers much earlier. We can run a competition to take people out to the set in Paris, for example, and we can set up blogs about the shooting process and run interviews with the stars and with Jackie Collins."

Editorially, Salter assures fans of the work of Francis, Pullman and Collins et al that there is no direction from the supermarket chain about the content of the screenplay. "Apart from telling the film-makers what I don't want to see in Tesco, then there is no interference in the subject matter. Of course, I don't want anything too risqué. Nothing that would be 18-rated and that would not sit well on our shelves.

"Other than that, though, there is no editorial involvement from us. We have been sent a script of the first film, so we know the story. That's it."

Tesco has already dipped its toe into the film industry in a deal struck with the Miramax production company over the 2009 Zac Efron film, Me and Orson Welles, which gave Tesco exclusive DVD sales rights, and in another Christmas deal with Dreamworks, giving it sole rights to sell the animated short film Merry Madagascar.

"The Madagascar Christmas DVD, promoted in the way we did, sold four times as many copies as it would have done if it was on the shelf with all the other DVDs we sell at Christmas. Our choice of the books for these new films is based on what we feel our customers would find most interesting," said Salter.

The volume of books sold is not dented by rival DVD sales on the opposite aisle, according to research carried out by Amber Entertainment. "In fact, the opposite is true," said Maisel. "People buy books when they have seen the film. When the public saw a film of the children's book Inkheart, which did not do as well in the cinema as had been hoped, the book still went into the children's bestsellers list after the film came out."

The Jacqueline Wilson title The Worry Website will be filmed in Britain, as will the selected Dick Francis thriller. A screenplay of the revered American children's author Judy Blume's 1981 novel, Tiger Eyes, is also in development, as is one of the novels from Pullman's Sally Lockhart children's adventure series.

Posted by Gorseinonboy at 12:15 PM No comments:

Posted by Gorseinonboy at 4:06 AM No comments:

This Day in History

Music for your mood ~ Right now

Wink me at the following sites:

make your own Wink Widget!